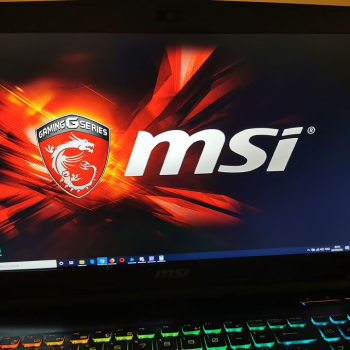 My AMD Ryzen desktop has found a new home.

Shortly after the release of the AMD Ryzen platform in early 2017 I took the plunge and upgraded to the flagship Ryzen 7 1800X processor. I got a pretty decent board too – an MSI X370 Gaming Pro Carbon. It was my first system to use DDR4, and a huge multithreaded performance upgrade over my older Core i7 4790k from 2014. Single core performance wasn’t a big jump, but it was something. To go along with my shiny new GTX 1080, I had an awesome system, and it suited me well with what I was doing at the time. Despite many other people having various teething issues with Ryzen, especially with memory compatibility, I never experienced any problems at all. I’m guessing I was just lucky. The system got me through most of my degree and was a total workhorse – it did a lot for me.

Since the latter half of my final year at university, the system has mostly been sat dormant in our home office. I haven’t been gaming anywhere near as much as I used to. Any gaming I have been doing has mostly been on the Switch or Xbox One. It seemed like a bit of a waste keeping the system sitting around. Used market prices of 1st generation Ryzen and 10 series cards aren’t particularly high anymore. Because of this, selling the system just didn’t seem worth it. I still need a fairly powerful Windows machine around, as I still wanted the ability to play games when I wanted to.

I spend a little bit of time most mornings browsing around Facebook’s marketplace looking for anything that might be interesting. One such interesting item I came accross was an MSI gaming laptop with these specs:

Given its 7700HQ, it’s of a similar age to my Ryzen desktop – early 2017. Despite it being a similar age, it’s quite a bit slower, with half the CPU cores, and almost half the graphics performance.

If we consider the monitors I was using with the GTX 1080 on the desktop however, the huge drop in performance seems completely reasonable when moving to the laptop. I was either gaming with a 60Hz 4k display, or a 144Hz 1080p display. In theory, those resolutions and frame rates need at least double the graphical performance. Since the display in the laptop is just 1080p 60Hz, I should still be able to achieve the display’s resolution and refresh rate with ease.

The drop in CPU performance is where I’ll really notice a difference. From running virtual machines, to editing video, it’s just going to be slower. But, I’ve got my desktop hackintosh or MacBook Pro with Final Cut Pro X if I want a good, optomised editing experience which works well on a slower CPU.

With it being a gaming laptop, making it super thin wasn’t MSI’s priority, meaning it’s quite upgradable. The CPU and GPU are unfortunately soldered in, but they won’t need to be replaced. The RAM is just a pair of standard DDR4 SO-DIMMs. Of course, these are really straightforward to replace. Along with those, there’s a replacable Wi-Fi/Bluetooth card, and M.2 SSD. Unfortunately, the stock SSD is only SATA, and only 128GB. The mechanical storage is a 1TB 2.5\” hard drive, and a DVD-RW drive. The likelihood of this being used, however, is quite small.

The only upgrade I’ve done so far, is to swap out the DVD drive for a second 1TB hard drive. This gives me a total of 2TB of spinning storage. In the near future, I intend to upgrade the SSD to a 1TB NVMe model. It’s not a hugely expensive, but a worthhile upgrade. Because I’ve added the second hard drive there’s no rush to upgrade to a 2TB hard drive. The downside to having 2 1TB drives however, is that it has a significant impact on battery life. I’ve got my MacBook Pro for portable use, so I don’t feel I’m missing out, not being able to use it on battery for long.

As well as upgrading the SSD, the plan is also to increas the memory to 32GB at some point too. As there’s only two slots, and they’re both populated at the moment, I’ll have to replace both sticks, so I can at least recuperate some of the cost by reselling the existing modules.

I’ll be the first to say I’m not a huge fan of Windows 10, hence why I attempted to switch to Linux a couple of months ago on the old Ryzen desktop. I much prefer MacOS for most tasks. However, for gaming there’s just no competition at all – Windows is just better. Because of that slight bias, we’ll ignore Windows as a factor. Although, as an experience of using Windows, it’s been a pleasant one. With that, maybe there was some stability issues with the old Ryzen platform.

If we look at just the hardware of the system; overall it’s a pretty good experience. Going from the 2880×1800 15 inch display on my macbook to this 1920×1080 display is a noticable difference, but the colour accuracy and contrast is still very good, so it’s not an issue. Typing on the Steelseries keyboard is a solid experience too. Of course there’s no comparison between it, and a mechanical keyboard, but I didn’t expect that.

There is one part of the whole experience which has been a huge dissappointment. That’s the trackpad. Once you’ve used one of Apple’s force touch trackpads, you find that just nothing on any Windows machine comes close. However, when you compare it to trackpads on high end Windows laptops, like the Surface laptop, or the Dell XPS series, it’s still awful. There’s a brushed plastic texture on the top  which isn’t very pleasant to use when moving left or right. The click of the buttons really isn’t very nice either. It’s basically just a huge disappointment.

So overall… has it been worthwhile?

In essence, yes. The trackpad issue has been easily resolved by using my Logitech MX Master when working, and my Cosair Scimitar when gaming. The change in storage is brilliant! I use an external 5TB USB-C drive for my mass storage for this, and my MacBook Pro, so any data I don’t need all the time is on that. Having two drives has made it very easy to seperate different activities. The stock drive is being used to store my games, and my user profile folders. Whilst the drive I added is being used to house all my music related apps and plugins, as well as anything I need for my work.

As I said before, the drop in graphics performance shouldn’t be hugely noticable in day to day use. That’s exactly the case. I haven’t missed the GTX 1080 at all, althugh I’m still yet to try using it for any VR gaming.

Apart from the trackpad issue I mentioned earlier, so far I haven’t had any bad experiences at all switching to this laptop instead of the desktop. I don’t regret it one bit. I’m quite pleased about that, as I didn’t want to have to sell this laptop to get another desktop.