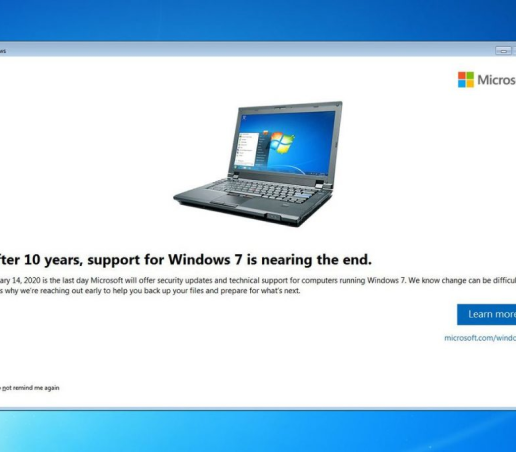 It’s been ten and a half years since Microsoft released Windows 7 – their most popular computer operating system of recent years.

On January 14th of this year, Microsoft pulled the plug on the extended support service for Windows 7. It still remains on a whopping 32.7% of all computers, according to NetMarketShare. Given that it’s a 10 1/2 year old system, it’s impressive how well it’s held up. Unfortunately, due to the lack of support, that’s 32.7% of computers which are now vulnerable to security flaws which remain. Had the support still been in place, any found issues would be patched pretty quickly.

I think you know what I’m going to say here to help you stay safe online. That’s simply, just don’t use Windows 7. Upgrade your PC to Windows 10, or even 8.1 if you want to for whatever reason. Many of the 32.7% of users chose to stick to 7 due to some significant changes Microsoft made to Windows. Many also just won’t have thought to upgrade, or didn’t know they even could. When Windows 10 was released, it gained a bad rep for being buggy and having Microsoft do some shady things with your user data. The stability, bugginess and compatibility of the OS has now been much improved, and the vast majority of users have no issues at all.

There are of course people who still have issues with Windows 10. However, they often have specialised hardware or use an obscure piece of software, which have been designed around Windows 7. In these situations, a virtual instance of Windows 7 can be used to allow access to the hardware or software.

What Can Happen If I Don’t Upgrade?

Well, nobody can say for sure exactly what’s going to happen to your PC. However, we can say that you will be vulnerable to any security flaws which are found in Windows in the future, as they aren’t going to be fixed by Microsoft. Regardless of how careful you try to be onlline, there’s always a chance that something will infect your PC. Using anti-malware software will of course, help to keep infections and other bad things off your PC; but these won’t fix security vulnerabilities in Windows. It’s possible that infections would be able to hide from anti-malware and exploit these vulnerabilities. Of course, it’s very very difficult to make your computer entirely secure, even with the best protection software, and very careful use of the internet.

Interestingly, the big security risk isn’t with users’ individual PCs. It’s when a huge number of PCs get infected, and become what’s known as a botnet. A botnet is essentially a large number of computers which have been infected by a piece of malware which can then be co-ordinated by one person to attack websites to take them down, steal data, and other such malicious activities. This is, in some ways much more dangerous than individual cases of infection, as widespread damage can be caused.

How Difficult Is The Upgrade, and How Much Is It Going To Cost Me?

The upgrade process itself is straightforward. It’s just the case of downloading the installer and clicking next, next, etc. As long as you have a backup of your data, there’s nothing to worry about. In all likelihood, the upgrade will go smoothly and everything will be right where you left it afterwards. Windows 10 has even gotten pretty good at getting the drivers for your devices itself too.

According to microsoft you have to buy a license for Windows 10 directly from them. This will run you £120 for home, or £220 for the Pro version. There are however, places where you can find it much cheaper than that – Amazon is one such place. There are others, but their legality is questionable so I won’t discuss them here.

Aside from paying for it, it is still possible to get the upgrade for free, just like Microsoft was offering between 2015 and 2016. This may or may not work for you, and I’m not sure how legal it is, so I won’t say anything else on the matter. I will however, send you over to an article about it if you’re interested here.

That’s about all there is to say on the matter really. I hope you’ve managed to gleam some useful information which will keep you safer as the internet is a scary, scary place.