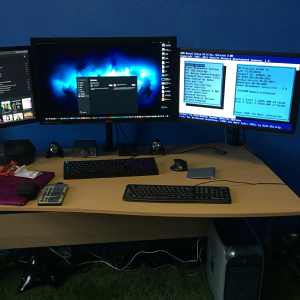 I run two main machines for everything – work and play. I’ve got a MacBook Pro Retina Mid 2015 for my laptop, and a custom built Windows machine for my desktop. I’ve grown to love macOS for getting anything done, other than gaming. Because of that, I use my laptop for everything, even though I have a desktop. My first thought was, “I could make it a hackintosh”, but it’s an AMD Ryzen system, so I can’t. There is progress being made on a Ryzen kernel, but I’m not sure I’d trust it yet for daily use.

I wondered if I could cobble together another machine, from some parts I had laying around, and end up with a working intel system that could run macOS. I had a case, RAM, SSD, hard drive, GPU and power supply. Only things missing were a CPU and motherboard. My file server had a Core i7 4790k in it, which is a little overkill for what it’s doing. That was swapped out for a Haswell-based Pentium. Ebay was scoured for the motherboard, and I found an Asus Q87 motherboard marked as untested for less than £20. I tthought I’d give it a shot… and bought it.

For a hackintosh, it’s important to find a motherboard which is highly supported under macOS. In this case, I didn’t do that, as things like on-board ethernet, USB, and audio aren’t that important to me. Haswell motherboards don’t always tend to have many USB 3.0 ports, so having that supported in macOS isn’t a big deal, as I ordered a PCIe Mac Pro USB 3.0 card, so I’d have more ports. Sound wise, I use an external sound card on my desktop all the time anyway. I know it works with my MacBook Pro too, so I don’t expect any compatibility issues there.

With most modern motherboards, there’ll likely be a network card onboard that someone has written a kext for. So the likelihood the onboard ethernet works is quite high. If it doesn’t, I have other network cards laying around. Basically, as long as the untested motherboard worked, I was go for building a Hackintosh with it.

I say I had a case lined up for the project, but I actually had two. I had a Silverstone RL04 lined up for testing. It was a budget case, when i bought it six years ago so I had no chance of keeping it permanently. I had two PowerMac G4s, one a Quicksilver, and one an original AGP graphics model. The Quicksilver in near mint condition and is a prime example of such a machine. The other, isn’t great – it’s a bit scratched up, and the door latch is broken.

I wanted to use one of these for a Hackintosh case, but I had to decide which. If I used the Quicksilver, I’d have a near brand new looking case for it. However, I’d be ruining the faster of my two G4s, and a perfectly good case by drilling and cutting it. On the other hand, If I chose to use the other model, I’d feel less guilty about it. I’d be cutting and drilling a worse off case, and I’d be destroying a much slower G4.

The AGP graphics was the model of choice for the chopping block. I went over to The Laser Hive, and ordered my conversion kit. I wanted to keep the case as unmodified as possible, so I ordered only the basic kit. The difference is that it doesn’t replace the power supply section too.

In the meantime, while waiting for the kit to arrive, I assembled the system in the Silverstone case. Getting macOS installed and ready, was actually quicker than it is for Windows 10. I used Unibeast on my MacBook Pro to prepare a USB stick with Mojave and the Clover bootloader.

I’m using an AMD RX 570 so I booted straight off the stick, without any boot flags at all. The installer booted, formatted the Samsung 850 Evo SSD, and installed macOS, all without any trouble at all. After booting from the SSD, using the Clover from the USB stick, and going through the initial account setup, I reached the desktop. Then something amazing happened… everything, just worked.

Of course I didn’t have Clover installed on the SSD yet so I ran Multibeast. I decided to install the audio and LAN drivers anyway, in case the Unibeast installer had added those. After a reboot, everything continued to work properly, including iMessage and FaceTime. In no time, I’d been through all my apps that I’ve got on my laptop, and got them setup on the hackintosh too. With iCloud drive syncing my desktop and documents folders, it’s a seamless experience switching between the two systems.

Once I knew that the software was all up and running, and seemingly stable, it was time to sort out the case. The first step was to strip out the old G4 hardware from the case. It was just the case of unscrewing and lifting everything out. The only things I kept was the hard drive bracket, and the power button box thing, from the front. Removing the plastic panels from the case made it look quite bizarre.

The latch on the door had never worked on the machine since I got it. With everything stripped from the case, it was quite obvious why. All the hooks at the top of the latch tray were broken off. For me to be able to lock the case, I have to put something though the latch lock at the back, It’s not the most secure system, but since the machine is stationary, it’s effective.

There are some metal parts inside these cases that can be removed to make the PC parts fit more easily. These include the PSU shelf, and the DVD drive cage. The shelf just came out by drilling out a few rivets.

There are two versions of the kit. One which includes a replacement power supply panel for the back of the case. The other doesn’t include it – which is the version I opted for. The common parts between the two are: a drilling guide, bag of screws, and the rear panel for the motherboard tray.

There’s existing stand-offs for the old motherboard attached to the motherboard tray, but they need to be removed. They just get yanked off with a pair of pliers. After that it’s the case of drilling out the holes for the new stand-offs. Using the template that comes with the kit, it’s a really straightforward process.

As you can see I’vedrilled the holes, and mounted the stand-offs necessary for my particular motherboard. The template has extra holes marked in case you have a wider motherboard. As well as just the motherboard mounting holes, you can see the other holes I drilled in the case too.

Mounting the back panel is very simple. it’s just the case of aligning the two parts of it then using the provided nuts and bolts to attach it.

With the case mods all done, installing the components is just like building any other PC. The only difference being that components aren’t located in their usual places. In fact, the whole case opens from the opposite side to usual.

The only modification left to make was the power button board. Like with everything else, it’s easy to do. I just looked up the pinout for the connector online, and wired the appropriate pins for the power button, power LED and reset buttons to the standard pin connectors that are used on ATX motherboards.

With that all done, it’s time to use the system.

The performance and experience

I’ve got a second SSD in the machine, which I’m using to boot Windows 10 for some gaming and other Windows only applications. I’ve been testing some games on it, including some VR games, and I’ve used it for some development of the game for the dissertatiion for my degree. Graphically, it performs as well as you’d expect for a small form factor RX 570. And for the CPU, well it performs slightly higher than the late 2014 5k iMac with the 4790k option in it, due to its better cooling system.

The overall experience of using the machine, especially when pairing it with a Magic Trackpad, feels no different to using a machine like a 2013 Mac Pro with a quad core CPU in it. I’m using a 27 inch 1440p IPS display from BenQ so it’s a similar display to a non-retina 27 inch iMac. It’s just overall, a great experience.

Where it’s found a home

Since my laptop is my main machine at the moment – both at home, and at my office. The hackintosh will be finding its home at my office, as I don’t have a dedicated desktop there as of yet, and if I need desktop at home I’ll have my Ryzen system.

Was it worth building a hackintosh?

Since I had most of the parts for the system already in stock, I can’t really come at this from the point of view of someone who is buying new parts specifically for one. I also used a 5 year old intel platform – Haswell – for the build, so things will possibly be a bit different if you go with something like a 9900k for your own build.

So… coming at this from the point of view of someone who has just mostly cobbled the system together.