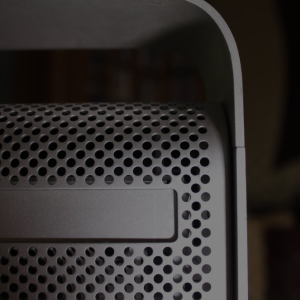 The first mac that I ever used was a 2001, 500 MHz Indigo iMac G3. That was back in 2008 when the machine was already incredibly outdated. Later that year, it became the first Mac I ever owned. That iMac is now long gone (with some regrets), due to the fact that I blew up the logic board, long story, but for another day.

The first ‘modern’ (at least at the time) Mac that I ever used was a 2,1 Mac Pro. The Mac belonged to the father of a friend of mine. He is a web developer, and at the time focused on flash websites, 3D animation, and graphic design. He now works for a massively popular online hotel booking platform (which shall remain unnamed).

At the time, this was a monster of a machine which could chew through anything. But now, sadly the dual x5355s in the 2,1 Mac Pro can’t even hold their own against even an 8 year old Core i5 2500k. So I bought its predecessor, the Mac Pro 1,1, in March of 2019. Yes it’s slow, heavy, loud, hot, and gulps power. But I don’t care, I have one; and you know what, it’s a really cool and awesome thing to own. it’s also been a fun experience upgrading it; and surprisingly, it’s actually been a useful machine to own. That’s impressive considering I’ve got three much more powerful and more modern machines. These include a mid-2015 MacBook Pro and a ‘Hackintosh’ with a core i7 4790k.

The Mac Pro I bought came from eBay and was listed for only £50. This is a very good price for even such an old machine. Unfortunately, that price was too good to be true as, there was no GPU, only one hard drive sled and a missing PCI slot screw bracket. For an extra £20, I got the ATI Radeon X1900 XT 512MB Graphics Card. This card was one of the most powerful of it’s time and the mid-tier offered by Apple. It was a huge upgrade over the woefully underpowered, and unreliable stock GeForce 7300 GT.

Upon ordering the Mac I came across a listing for 4 drive sleds, which I got for only £10. So at a glance, my Mac Pro looks complete, although on further inspection, the PCIe screw bracket it noticeably missing. The specs of the machine are:

It’s not the lowest end model Apple sold – the CPUs could be downgraded to the 5130s for a discount. Also, as previously mentioned the GPU could also be downgraded; to the 7300GT. The RAM appears to have been upgraded after purchase as only the two 512MB sticks are Apple branded. The other two 1 gigabyte sticks are Crucial branded.

Before purchasing the Mac, I took it upon myself to research the maximum CPUs and RAM that it could take, as well as its support for MacOS updates.

CPU support on the 1,1 is an interesting one, technically they only support the 5100 series Xeons. With the latest firmware update it’s possible for it to boot with 5300 series Xeons. However, “About This Mac” will show them as \”unknown\” for the model. The fan profile won’t quite be right either, so they might run a bit hot. For the 5300 series to be recognised correctly, the 1,1 firmware has to be upgraded to the 2,1’s firmware. This works, as the hardware between the two models is almost identical, the only differentiating factor is the software. After the firmware update, the SMC firmware can be modified to account for the new fan profile.

The 5100 series are all dual core chips, whilst the 5300 series are all quad core chips. This is effectively a 2x improvement in CPU performance, so this is an obvious upgrade which will definitely be worthwhile. The fastest 5300 series Xeon available is the X5365, which is a 3.00GHz quad core chip. The Mac can take two of these, making it an 8-core 3.00GHz system. However, these X5365s are about twice the price of the X5355s, which are only 340MHz slower on each core. For half the price, it’s worth the loss, given how much it will actually affect the usability of the Mac. Typically the X5365s go for about £30 for a pair on eBay, and the X5355s about £15 a pair. I found my X5355s for only £10 for a pair.

So that’s the CPUs sorted, next up was the ram. Luckily, due to my server situation, the soon to be retired IBM x3650 M1 (7979), donated eight 2GB sticks. Storage wise, I had enough drives laying around to be able to add a 1TB and a 320GB. I also had a 120GB Kingston SSD laying around so it got that too.

The last part was MacOS, I’ve used hacked versions of MacOS installers before, to install Mojave on a 2008 MacBook Pro, and a 2010 iMac. This was only necessary as both of these machines don’t support the Metal graphics API that’s supposedly required for Mojave. Despite both the 5100 and 5300 series Xeons being 64-bit CPUs, the EFI in both the 2,1 and 1,1 Mac Pros is only 32-bit, which (according to Apple), limits them to Mac OS X Lion (10.7), which is from 2011. Almost no modern software supports Lion, rendering the Mac insecure, and thus almost useless for anything modern.

Unofficially, both the 1,1 and 2,1 support up to El Capitan, with the use of a modified boot.efi file. This enables the 64-bit only OSes to boot on a 32-bit EFI. Before attempting to install any new hardware, I decided to try and get the newest version of MacOS I could installed with the old stuff.

When beginning the upgrade process, I used an app called MacPostFactor to create a USB stick with the modified installer on it. I decided to try installing 10.8 Mountain Lion first, as that is the oldest version of MacOS not natively supported by the 1,1 and 2,1, and so, out of any version it is presumably the most likely to work.

In fact, Mountain Lion installed without issue, as did Mavericks and Yosemite. It wasn’t until attempting to install El Capitan that I encountered any problems. Unfortunately, the installer wouldn’t boot at all. Luckily, it just ended up being the installer, and not El Capitan itself. I found online a patched hard drive image of El Capitan from YouTuber “Hrutkay Mods”. This pre-created image, worked great. It took very little time to copy onto the Mac Pro’s hard drive (using SuperDuper), and all the modifications necessary the modified boot.efi, and any legacy graphics kexts, were already setup.

As wonderful as it is to have a much later version of MacOS on the Mac Pro, there is of course going to be some caveats, mainly two. The speed of using a hard drive would severely hamper the machine’s usability, but that can be said for any Mac of recent years without an SSD. This is why I added the 120GB SSD to the Mac as well as the hard drives. All of my main machines have SSDs, at least as their boot drives, so using any system without one, feels so slow it’s unusable. The other being the X1900 XT, as great as this card might have been with Lion and earlier, it does not fair well with anything newer, as any graphics acceleration has to be disabled for it to be functional at all.

So, off to eBay and Google I went. In the end, I bought an Nvidia GT 640, which is natively supported by MacOS Mountain Lion and later. The only downside to this, is that there isn’t any boot screens when using a non Mac Edition card. This means that if I ever need to get into the boot menu or see the boot screen for any other reason, I’ll need to reinsert the X1900 XT.